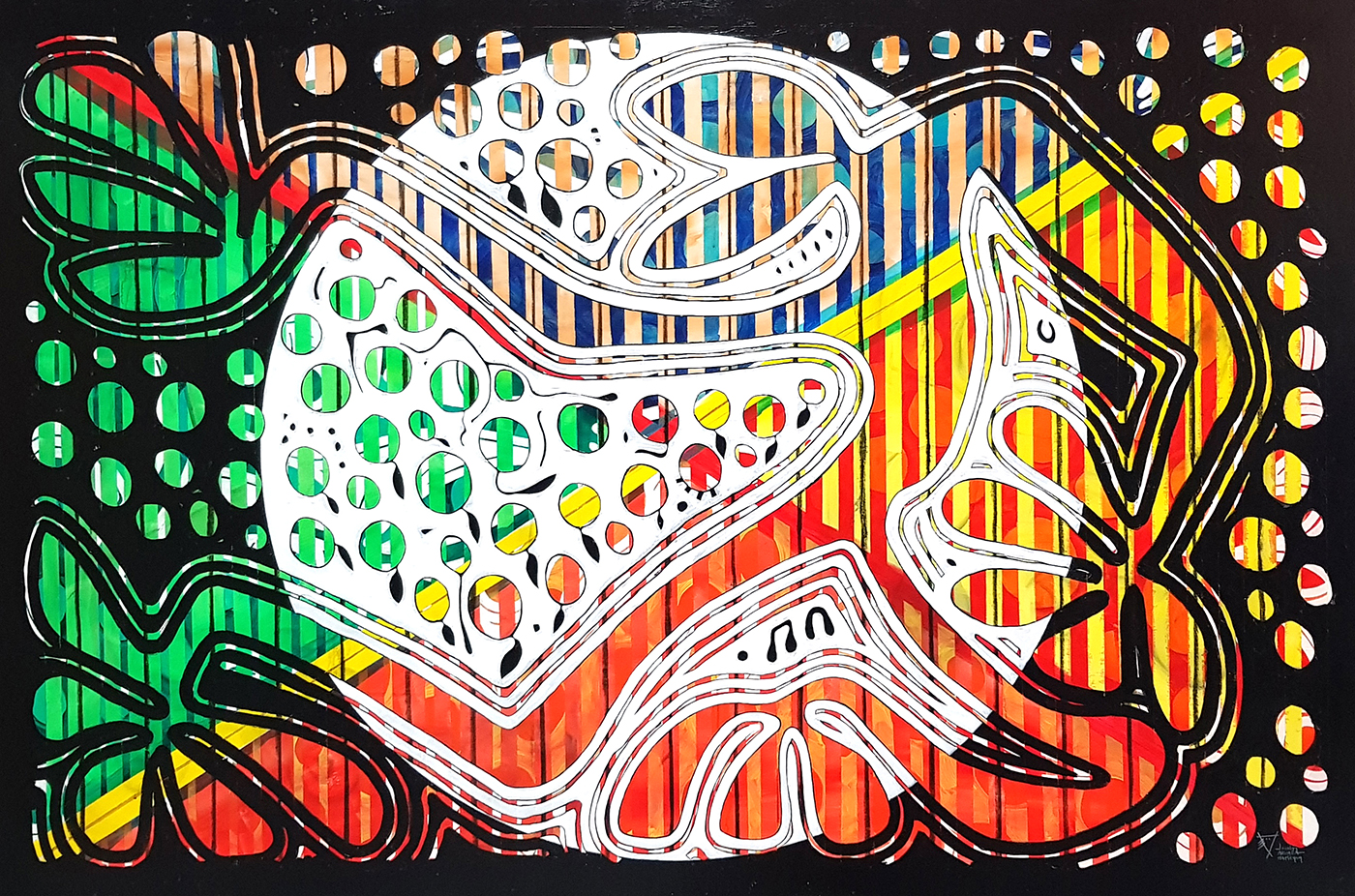 Inquire now to learn how utilizing IDON can create savings of $5,500.00 on this asset.

Jocelyn Akwaba Matignon was born on December 25, 1961 in Pointe à Pitre in Guadeloupe.

He left his island and arrived in the North of France at the age of 4.

Francis his adoptive father, who during the Algerian War drew soldiers’ postcards and letters, introduced him very early to drawing and painting, which enabled him to develop his artistic sensitivity very early on.

After computer studies and a career in this field, he turned to the glassblower profession and became a master glassmaker.

Having toured this very difficult area on the technical level and driven by the desire to express something other than artisanal creation, at 28, he joined the School of Art of La Roche sur Yon in Vendée then the  School of Fine Arts of Angers.

The School of Fine Arts is for him a revelation and a richness in his personal quest.  Knowledge of Art History and the great masters of painting triggered his fascination with pictorial art and a desire to contribute, participate and enrich the path of artistic research.

In 1993, exhibition curator, he organized with the group of artists “Trames” of which he is a founding member, his first major group exhibition as part of the association “Les Anneaux de la Mémoire”. This “Cimarron” exhibition presents the work of a dozen painters from the greater Caribbean at the castle of the Dukes of Brittany in Nantes.

His first trip to Africa in Burkina Faso, as a photographer, led him several years later to work on the spirit of the African mask.

In 1995, he moved to a large workshop in Nantes, which belonged to the Royal de Luxe company.

This workshop becomes a place for interdisciplinary exchanges and meetings.

His first period of work “the spirit of the earth” is a plastic research based on the use in his painting of natural elements of the forest.

In 1998, he exhibited his works at the Galerie Oudin in Paris with Wifredo Lam and Henri Guédon.

That same year, he began his Native American quest following a dream.  He therefore undertakes to study in depth the whole of the spirituality of the Amerindian world.

In 2003, he returned to his native country to paint and work there.

In 2009, he incorporated his dreamlike character “Kioukan” into his painting.

In 2010, he made his first trip to Guatemala.  It will be for him the concretization of his years of theoretical research.  He then incorporated into his painting the symbolic whole of Mayan and Amerindian spirituality.

Around 2011, his pictorial technique was enriched by a work of photos retouched on a computer and then transferred to the bottom of the canvas.  It also introduces phosphorus on certain works for night vision.

Since 2012, he has produced an artistic installation in the center of his exhibition spaces in the form of a Native American medicine wheel.

In 2016, he was selected by the French Institute in Seoul for the France-Korea year, which celebrates the 130th anniversary of bilateral diplomatic relations.  He is presenting some forty works in a solo exhibition “From the Infinite to the Center” at the prestigious Korea Foundation Gallery in Seoul.

In 2017, he made his first artistic residency in Guatemala for 3 months. He painted about fifteen large canvases incorporating the colors used for the facades of the houses as well as the volcanic ash from the neighboring volcano “el fuego”.  He returned there in 2019 for an exhibition “Aguas Calientes” in Antigua de Guatemala at the Spanish Cooperation which welcomes more than 21,000 visitors.
For the past ten years, he has worked in the school environment through artistic workshops. He also offers conferences on the theme of Mayan cosmogony and Native American symbolism in correspondence with his artistic work. 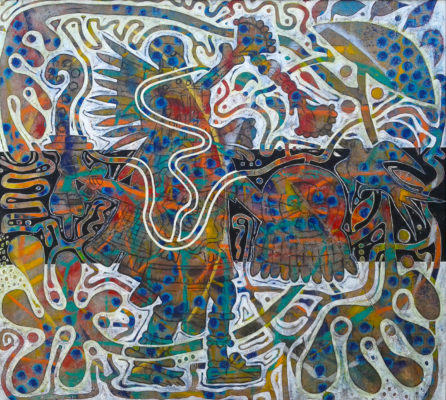